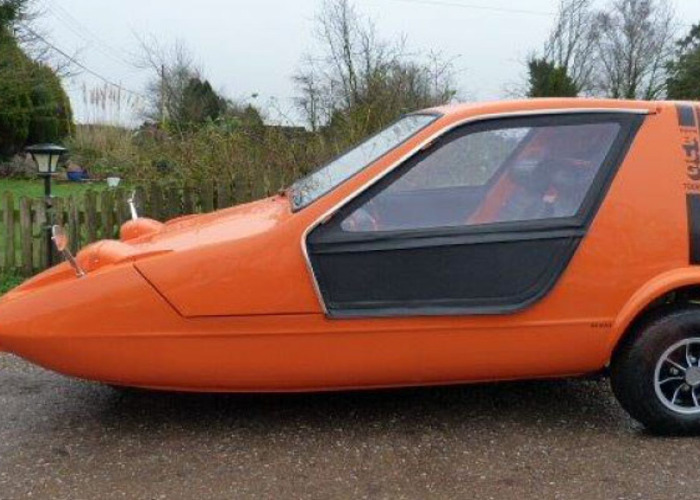 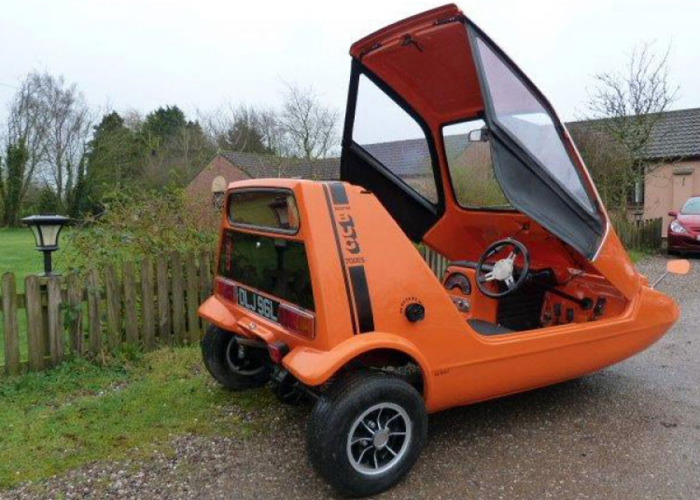 The Bond Bug is a small British two-seat, three-wheeled automobile which was built from 1970 to 1974, initially by Bond Cars Ltd and subsequently by the Reliant Motor Company. It is a wedge-shaped microcar, with a lift-up canopy and side screens instead of conventional doors. Following the purchase of Bond Cars Ltd., Reliant commissioned Tom Karen of Ogle Design to design a fun car. The engine is...the front-mounted 700 cc (later uprated to 750 cc) Reliant light-alloy four-cylinder unit, developed from the Austin 7, and which protruded into the passenger cabin. At launch 29 bhp (22 kW; 29 PS) was claimed for the less expensive 700 and 700E models. The more up-market 700ES incorporates a redesigned cylinder head which permitted the compression ratio to be increased from 7.35:1 to 8.4:1. This provided a power increase to 31 bhp (23 kW; 31 PS) as well as improved torque for the then range topping 700ES. The Bond Bug 700ES also offers more supportive seats as well as more padding over the engine cowl, twin mudflaps, an ashtray, a rubber front bumper and a spare wheel. Registration no: DLJ 96L Chassis no: BB62127 Engine no: 8839 Engine: 700cc Passenger Seats: 4